This Book (by Greg Gutfeld) is Almost Unspeakably Profane 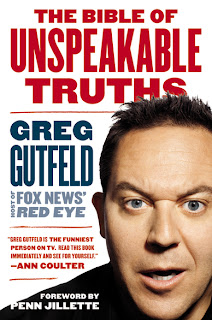 As host of Red Eye, Greg Gutfeld shares "some honest crap about the world" without pulling any punches and for free. But in The Bible ofUnspeakable Truths, he wants you to pay for the pleasure. "[I]t’s almost the same thing," says Gutfeld, "give or take the suggested retail price."

The book covers everything from "political crap" and "obligatory sex junk" to "things that are stupid" and "stuff you put in your face." Gutfeld’s style, as you can see, is less than academic. In fact, it is crude, over-the-top, and full of profanity. Consider each of these, starting with the last.

Looking for profanity in Unspeakable Truths is like looking for hay in a hastack; if Gutfeld is making an important point chances are extremely high that it is included.


Speaking of the absurd notion that violence is an infection, Gutfeld says: "If only there was a word that describes this idea. Oh yeah. Batshit crazy." He describes language as "the only thing we have to communicate our needs and other important crap to each other," adding that "it’s bullshit to muddle or subvert [language] in order to placate a special-interest group’s sensitive little feelings." Finally, just to give another data point, in responding to statements that is not popular, Gutfeld asks:

What the hell is wrong with being unpopular? And when did it matter how assholes felt about us anyway? That’s right assholes. Most of the world is made up of them, and the fact that they hate us means we are doing something right. is unpopular with countries like and because their leaders are exactly like Saddam Hussein. So when they see one of their own yanked out of the catbird seat . . . you can bet they’re going to be pissed as hell. And scared, too. The idea that we should give a fuck about these feelings is absurd and, sadly, pathetic.

Over-the-top claims are as frequent. A Big Mac, according to Gutfeld, has "everything you need to stay alive" and is "truly God’s supplement for a starving world." Meanwhile, Gutfeld goes from observing that murder victims nearly always know those who killed them to saying that "the fewer people you know, the less likely you’ll be killed" to concluding that "no friends equals no crime." "This is why Keith Olbermann could live forever," he says.

Sometimes Gutfeld is both over-the-top and crude. For example, at one point he promises to solve the two big issues for both political parties: immigration and terrorism. Gutfeld points out that the "folks behind terror reproduce like crazy." He says that while our population shrinks they "tend to pump out killers like they’re Doritos." Why is this a problem? Because, Gutfeld says, "Numbers dictate success." But according to Gutfeld we have a secret weapon: Mexicans—"the one hope against an enemy whose aim is our extinction."

While Mexicans bus your table, they’re defending Western civilization. While they blow the leaves off your lawn, they’re striking a blow against terror. Mexicans are the Mace against madmen, because they outscrew the creeps who kill for Allah. As we embrace cats over kids, Mexicans multiply, preventing us from becoming —a continent flooded by people who hate Europeans. Mexican families love this country. I don’t like (diarrhea, people), but I love Mexicans. If you are Mexican, and you aren’t here yet . . . then come . . . in every sense of the word. We welcome you with open arms and legs. We’re powerless to prevent you from coming here anyway, thank God. You’re too determined, and we’re too disorganized and distracted.

This sort of style, however funny to some, may disqualify the book for many—and understandably so. But for those that can bear it, Gutfeld certainly has more to say. A lot more.

For example, he slams environmentalism and the current global warming madness a number of times. Regarding the latter, he points out that "most of the earth’s lush vegetation arose due to warmer temperatures" and thus even if global warming were true "it might save more people than it kills." But "[Al] Gore could never agree with this," says Gutfeld—"because it would turn his whole life upside down and all the stupidity would pour out his nose."

Gutfeld also tackles numerous subjects having nothing to do with politics. He says S&M lovers are cowards who "live in a world of pretend pain"—advising them that if they want to let someone else "be in charge" they should "try an actual relationship with a female." He slams schools for abolishing grades "because objective truth hurts dumb students"; says that hot women are never stalkers, just "avid fans"; and points out that "weapons work wonders as long as the good people have them . . . because when you point a gun at a bad guy, it makes him reconsider being bad."

At one point in the book, Gutfeld says he respects and admires anyone "who works hard for a living, knowing that self-esteem has no place in this world, until of course they’ve done something to deserve it." That is a surprising moment because for much of the book up to that point—and nearly all of it following—Gutfeld is relentlessly negative and self-effacing. In fact, while he can be especially cruel to many who deserve it, he bashes himself more than anything or anyone else. I personally found this excruciating—much more so than the constant use of profanity.

Is Gutfeld’s book worth reading? There is definitely some value in The Bible of Unspeakable Truths, and fans of Red Eye may enjoy it. But it is not for everyone. Those who do not like an aggressively hostile, crude, and over-the-top, self-effacing style should probably read something else.
Posted by Daniel at 7:54 PM